A Simple Guide To Rome Italy

Without doubt, Rome is definitely one of the most beautiful cities in the world to visit and every year is home to millions of tourist, flocking to see its glory and the many different attractions Rome has to offer. 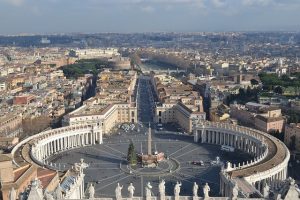 However, if you have never visited Rome before, it can seem a little daunting when you first see how many fantastic sights there are to see and you are wondering how you will fit everything in on your trip. Hopefully, this simple Rome guide will help answer some of your questions and will also help you plan your visit and ensure you see and do everything you hope to see and do in Rome.

What You Will Find In This Guide

In this guide you will find lots of practical advice, discover the best attractions to see and visit in Rome, find the best hotels close to major attractions and landmarks in Rome,  learn which Metro stations are closest to the attractions and we have also provided you with a large number of useful videos to watch, that will be very useful and beneficial for your visit to Rome.

Where Is Rome Located:

Rome is located in central Italy on the Tiber River and about 15 miles (26 kilometers) from the Mediterranean coast.

What Is The Population Of Rome:

The population of Rome is estimated to be around 3 million people.

When Was Rome Founded:

Although Rome is estimated to have officially been founded around 753 BC, the area was inhabited long before that and it is considered to be one of the oldest inhabited areas in Europe. As a result, the city centre of Rome is like one big open-air museum that is listed as a UNESCO World Heritage Site.

Rome was built on seven hills and legend says that it was founded by Romulus who killed his twin brother Remus, after they had both been raised by a she-wolf.

Which River Runs Through Rome:

The Tiber River runs through Rome.

Why Is Rome A Romantic Place To Visit:

Rome is considered to be one of the best romantic travel destinations to visit because of its relatively small historic centre, culture rich architecture, history and great food.

Planning Your Visit To Rome

If possible, choose the dates you visit Rome carefully. Obviously, this may not always be possible for various reasons but if you are flexible with your dates, try to choose them wisely.

When Are The Best Times To Visit Rome:

Generally, the best months to visit Rome are April, May, and late September through October. These months are pleasant and not too hot, unlike the peak Summer months of June, July and August. The peak Summer months in Rome, can become very hot and are when the crowds in Rome are at their busiest. As a result of the large crowds, the queues for the attractions are bigger and waiting in the queues in the blistering heat is no fun.

If you do plan on visiting Rome during the peak Summer months, it is advisable to book your tickets in advance and if possible, consider purchasing one of the many ‘Skip The Line’ tickets and passes.

However, it is also advisable not to visit Rome in the earlier months of the year or later months, as many of the attractions in Rome reduce their opening hours and some are closed completely.

How Long Do I Need In Rome

Rome is such a large city with so much to see and do and if you are only visiting Rome for a couple of days, you will not be able to see all the sights Rome has to offer. Even in a week, you will be hard pushed to fit everything in, as there really is so much to see. If you are limited with time but can visit Rome for 4 days, then do so! If you can stretch to a week, then great and you will be glad you did. This said, if you only have one or two days in Rome, don’t be put off because any time in Rome will be amazing and at least you will have a good excuse to visit again!

All you will need to do, if you are restricted with time, is plan your journey before you go, so you can maximise your time in Rome.

Tip: If you are restricted with time, then consider one of the Hop on Hop Off guided bus tours, that will take you to all the major attractions and landmarks in Rome.

Another advantage of visiting Rome in April, May September and October, is that the flights are generally cheaper. As you can imagine, flights to Rome during the peak season and Summer months, will command a higher price.

Tip: If possible, a good tip is to check what the flights are available on certain dates and then plan your trip to Rome around when the cheapest flights to Rome are. Using one of the flight comparison websites, will make this task very easy for you, as they will list all the available flights and which airlines the flights are with.

Rome has two major International airports that service the city and they are Fiumicino Airport or  “Leonardo da Vinci airport” as it is commonly known and Ciampino Airport. Both airports provide easy access to the city centre of Rome and each airport has its advantages and disadvantages.

The airports in Rome are often referred to as many different names such as Aeroport Roma, Airport di Roma and Airport Roma but if people are speaking about a specific airport, they will generally use the name of the airport Fiumicino or Ciampino.

Which Airport To Choose

To be honest, which airport you choose to fly into in Rome, is simply down to your budget and what flights are available.

Although Fiumicino Airport is the main airport in Rome, Ciampino Airport is actually located a little closer and normally has cheaper flights. Both airports offer easy access to the centre of Rome and have regular flights from the UK throughout the year.

Trains From Fiumicino and Ciampino Airport

Buses From Fiumicino and Ciampino Airport

There are several bus services that run from both Fiumicino and Ciampino airports to the centre of Rome. The majority of the buses that run to and from the airports, are scheduled to coincide with all the flight arrivals and departures. Although you can buy your ticket when you arrive at the airport, it is advisable to book your transfer in advance to ensure you reserve your seat(s) on the transfer you require, especially during peak season.

If you are just visiting Rome, then hiring a car would not be advisable, as it is not necessary and would probably cause you more stress than not. Obviously, the decision is yours but driving in the centre of Rome can certainly be manic at times and the traffic in the city centre can be very busy. Not only that but parking in Rome can be a nightmare and it could end up costing you a small fortune in parking fees!

Tip: If you are planning a visit to Italy and want a car for your trip but are only visiting Rome for a short period of time at the beginning of your trip, then it may be easier to catch the train to Rome from the airport first. Then, once you have visited Rome, catch the train back to the airport and arrange to collect the car then. You can then drive on to your next destination and you will have avoided having to take the car into Rome, as well as saving yourself the cost of a few day on car hire.. You can then simply drive back to the airport and drop off the car on your return.

Find the best prices on car hire from airports in Rome.

What Is The Main Train Station In Rome:

The main train station in Rome is known as the Termini.

Where Is The Main Station Located:

The main train station (Termini) is located in the centre of Rome and provide easy access to the city. North East of the Colosseum

Places To Stay In Rome

Well, there are literally hundreds of places to stay in Rome, that range from basic Bed & Breakfast establishments to luxury 4 & 5 star hotels in Rome. Which place you choose to stay in Rome, will simply boil down to your own personal preference and requirements and of course budget.

Obviously, the best places to stay in Rome are generally in the city centre or close to the attractions and landmarks you need to be near. Walking out of your hotel and straight into the heart of the city is an added bonus but the accommodation in the centre of Rome can often command the highest price.

If you have never been to Rome before and are looking for the best accommodation to suit your needs, it is a good idea to familiarise yourself with the city by looking at a map and deciding where you need to be. Below we have provided a map which shows all the available hotels and their location.

How Much Is Accommodation In Rome

Below is a live up-to-date-map of all the hotels that are available in Rome and their locations. Simply enter the dates you require and the map will display all the available hotels in Rome for your dates, the hotel location and price for the duration of your stay. Using the map, will help you find the cheapest hotels in Rome for the dates you require.

Where Are The Attractions In Rome Located:

Rome has a very large number of attractions at throughout the city, however most of its famous attractions are located East of the Tiber River.

Where Is The Colosseum Located In Rome:

The iconic amphitheatre known as the Colosseum, is pretty much centrally located in the city, right next to the famous Roman Forum and Altare Della Patria (Altar of the Fatherland).

Is The Circus Maximus Close to The Colosseum:

How Far Is The Colosseum From The Main Termini Station:

The Colosseum is located approximately 1.1 mile (1.8 kilometers) from the Termini Station and takes about 20-25 minutes.

What Is Vatican City:

Located within the city of Rome lies the world’s smallest independent country, the seat of Roman Catholic Church, Vatican City.

Weather and Climate In Rome

Rome has a Mediterranean climate with mild Winters and hot, humid Summers. The temperatures in winter typically range between 32 and 53 Fahrenheit or 0 to 12 degrees Celsius. Rain is common in Winter, especially in the December which is also the wettest month.

Spring: Weather in the spring is unpredictable and average temperatures range between 41 and 73 Fahrenheit or five to 23 Celsius.

Summer: Summers in Rome are hot and humid and the humidity is typically around 70%, with little rain and the temperatures usually range between 60 and 90 degrees Fahrenheit or 15 to 32 degrees Celsius.

Autumn: Autumn is generally nice, it is still warm, dry and between 44 to 80 degrees Fahrenheit or 7 to 26 degrees Celsius.

Please Note: These are just averages and the weather can vary. It is advisable to check the weather forecast before travel.