Vittorio Emanuele Monument (The Altar of the Fatherland) Rome

The Vittoriano attracts a large number of visitors each year to both the monument itself and the museum below.

Why Was The Altar Of The Fatherland Built?

The National Monument of Victor Emmanuel the 2nd. This very large and impressive monument, often known as “Il Vittoriano”, is dedicated to the unification of Italy. 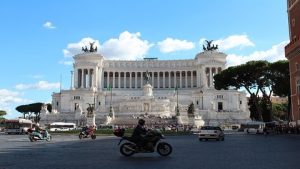 The monument actually honours the first king of the unified Italy, which was Victor Emmanuel the 2nd. As King of Sardinia, Victor Emmanuel was a prominent figure in the movement for a united Italy. After his army had joined forces with the political and military leader, Guiseppe Garibaldi, together they eventually defeated the opposing Papal army. Soon after they had defeated the Papal army, the Kingdom of Italy was proclaimed in 1861 with Victor Emmanuel as king.

17 years later and soon after Victor Emmanuel’s death, it was decided to construct a large monument in his honour. A competition was organised for designs for the monument, which was won by a young Italian architect called Guiseppe Sacconi.

The location for the monument was designated at the Northern slope of the Capitoline Hill, which was the central and sacred hill of Ancient Rome. However, before the monument could be built, several old Roman ruins and medieval churches were destroyed, in order to make room for the monument. As you can imagine, this decision caused quite a large amount of controversy and debate.

When Was The Altar Of The Fatherland Built

The construction took many years to complete and took place between 1885 and 1911. On 04 June 1911 the monument was inaugurated by Vittorio Emanuele III, which was the date for the 50th anniversary of the Unification of Italy.

However, although the monument was inaugurated in 1911, it wasn’t actually fully completed until 1935, when all the statues and sculptures were in place. The monarchy only lasted another thirty years after the completion of the Vittoriano.

How Tall Is The Altar of the Fatherland

The magnificent monument is approximately 70 meter in height and 135 meter wide. building also provides an excellent observation point and from the rooftop, you can get a fantastic view over the city and its geography.

As previously mentioned, the monument was designed by Giuseppe Sacconi, who had designed it in a typical neoclassical style. The Vittoriano was built around huge stairways and tall Corinthian columns. Throughout the monument itself, you can see statues, sculptures, as well as many beautiful relief statues which were are made by renowned Italian sculptors from all over Italy. The main centrepiece of the Vittoriano is the large equestrian statue of Victor Emmanuel the 2nd, which you can see in the photo.

Around the base of the bronze statue, there are 14 relief statues, of which each represents an historically important Italian city and then directly underneath the equestrian statue, there is another huge relief. 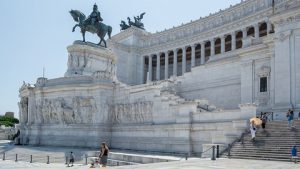 In front of the monument, you will see an eternal flame, which is guarded by soldiers, the flame burns to mark the grave of an unknown soldier from World War One.

On either side of the staircase, there are the monumental fountains known as the “Due Mari”, these fountains, represent the two seas that surround Italy, which are the the Adriatic sea and Tyrrhenian Sea.

Looking at the roof area of the monument, you can see two other big bronze statues. These statues depict a Guadriga – which is a chariot being pulled by four creatures and the Roman victory goddess Victoria riding them. Together, these are designed to symbolize the unity and liberty of Italy.

Due to the shape of the monument, it has been given several nicknames such as:

The monument was labelled ‘The Typewriter’ from Allied troops during the 2nd World War.

If you are visiting the Vittoriano, it is worth taking a look at the museum, which is located in the base of the monument. This museum is dedicated to the unification of Italy and if you have an interest in history, it is well worth a visit.

The rooftop terrace is a must and you can get access to the rooftop via a lift at the back of the monument. It is without doubt, that the views over Rome from the terrace provide you with some of the most panoramic views from anywhere in the city.

Altar of the Fatherland Tickets

As with any major attraction in Rome, the Vittoriano – Altar of the Fatherland odes get very busy, especially during the peak period. Pre-booking your tickets in advance is always a very good idea and with help eliminate waiting in the queues during your visit.

Vittoriano – Altar of the Fatherland Tour

The Vittoriano – Altar of the Fatherland is certainly an incredible and impressive structure to look at from the outside but if you have the chance, to take one of the tours around the Vittoriano, you will learn a whole lot more about this iconic monument and the history behind it.

There are several tours available and many of the more popular tours combine the Vittoriano tour with the Colosseum and Roman Forum.

As well as the Vittoriano – Altar of the Fatherland, there are many more great sights and landmarks to see in Rome. To find out more about Rome, please visit the following page: Things to see and do in Rome Italy