Leeds Bradford Airport is the gateway to Yorkshire and services many of Yorkshires most famous towns and cities, including Leeds, Bradford, Wakefield, Sheffield, York, Harrogate, Wetherby, Skipton, Knaresborough, Otley and Ilkley, to name but a few. The airport is also the gateway to the Yorkshire Dales and the world famous Lake District. 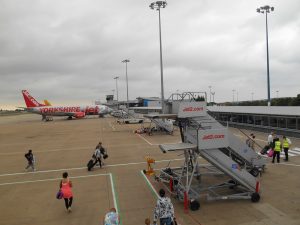 Over the years, Leeds Bradford has certainly grown and now has a large number of passengers passing through it each year, for both leisure and business visitors.

On the webpage you will also be able to read about Arrivals and departures, car hire and car rental companies, check-in, taxis, shuttle buses and the local airport bus, airport parking, hotels near the airport, Duty Free and much more.

We have listed the most frequently asked questions below so that it offers a quick reference guide for you and the questions you may have.

Where Is Leeds Bradford Airport

Leeds Bradford Airport is located in a small village on the outskirts of Leeds and Bradford called Yeadon. The airport was originally called ‘Yeadon’ Airport until it was later renamed ‘Leeds Bradford’.

How Far Is The Airport From Leeds City Centre

The city centre of Leeds is Approximately 8-10 miles from the airport, depending on which route you take. However, the very efficient ground Support and transport network that services the airport, makes it very easy to get to and from Leeds Bradford Airport to so many different destinations throughout the UK.

How Far Is The Airport From Bradford City Centre

How Do I Get To Leeds Bradford Airport

Getting to the airport is relatively easy, whether you are travelling by car, bus or train. The airport is well signposted from all the main major road links and motorways and you can pick up the signposts from the M1, A1 and M62 motorways.

Who Flies From Leeds Bradford Airport

The airlines that now service LBA are:

Although Leeds Bradford Airport has grown in size over the past few years, it is still a relatively small airport in comparison to many other airports in Europe. However, although LBA is a small airport, it has a large number of facilities and amenities on offer for its passengers. The airport is very well equipped to accommodate all passenger needs and has services such as car hire, bars, restaurants, parking, Duty Free, Lounges, bus services, shuttle buses, hotels close by, smoking area, shops and much more.

If you are travelling to Leeds Bradford Airport with checked-in Hold luggage, you will need to make your way to the ‘Baggage Reclaim’ Area at the airport. There a several carousels located in the Baggage Reclaim Area and each flight arrival is allocated a carousel. Once you reach the Baggage Reclaim Area, you will need to locate the carousel that has been assigned to your flight. This can easily be done by simply looking at one of the overhead monitors, which will display all the flights and the carousel number they have been allocated.

Are There Public Buses From The Airport

Yes, several buses run from the airport and connect passengers to the many towns and cities close to Leeds Bradford.

The beauty about the location of Leeds Bradford Airport, is it is very central to Leeds, Bradford and Harrogate and as a result, getting to all three is very easy by bus. There are several bus services that operate to and from the airport, providing a cheap and efficient form of transfer for passengers arriving at or departing from the airport. Buses run to and from Leeds Bradford Airport at regular intervals throughout the day and night, so passengers do not have long to wait for a bus.

There are a number of different bus services to Leeds, Bradford and Harrogate, that also stop at many different towns and villages on route that are close to the airport.

The Flying Tiger operates a number of nus services to and from the airport and there are buses running from the centre of Leeds, Bradford and Harrogate. The main bus services are:

737: The 737 bus service operates between Bradford Interchange and Leeds Bradford Airport, stopping at:

Please Note: These Times were correct at the time of writing but are subject to change. To check the current timetables for the 737, please click on the following link: 737 bus Timetable