Quick Facts About Vienna In Austria

Flight Time From UK: The average flight time to Vienna from the UK is between 2hrs 5mins – 2hrs 40mins depending on which UK airport you depart from.

Nearest Airport: The closest airport to Vienna is ‘Vienna International Airport’ which is located approximately 18klm (11 miles) South East of Vienna city centre itself. Bratislava Airport is just 90klms (55 miles) from Vienna and is another alternative.

Location: Vienna is located in the heart of Europe in the Eastern part of Austria known as the Vienna Basin on the banks of the Danube River. 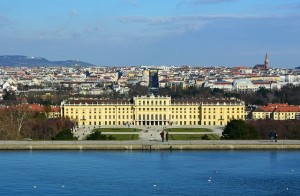 Vienna is an ancient fortress city and the capital of Austria. It used to be the hub of the Austro-Hungarian empire to which many remains of this empire can still be found in Vienna today in the buildings, museums and parks around the city. The city of Vienna is divided into 23 Districts and attracts a large number of visitors throughout the year from all over the world.

Population: The population of Vienna is approximately 1.8 Million.

Currency: The Euro is the currency of Vienna.

Language: German – However, some areas in the North do speak Central Austro-Bavarian.

Time Zone: Vienna is 1 hour ahead of UK time.

Climate: Vienna has a temperate climate with warm Summers and cold Winters.

Summer: The Summer months in Vienna are usually very warm and see temperatures averaging in the mid to late 20’s.

Winter: The Winter months in Vienna can be very cold and see temperature falling below freezing. If you intend visiting the city during the Winter months, it is advisable to take warm clothing.

Public Transport: The public transport system in Vienna is very efficient and the city centre is serviced by train, bus, tram and subway. There are several ticket options available for transport and it is advisable to check first to see which is the best suited to your requirements and duration of your stay.

Things To See And Do: Vienna is a beautiful city with so much to see and do from tours to sights and museums. The city of Vienna is a city of culture with music, coffee shops and balls that will keep you entertained for the duration of your stay.

Attractions: Vienna is famous for is beauty and architecture and the following are just a few of the popular attractions that Vienna has to offer:

Events and Festivals: Throughout the year, Vienna hosts a number of different festivals and event such as the New Year’s Concert, Vienna Opera Ball (Part of the Vienna Fasching Carnival and always held on the last Thursday of Carnival season), May Festival (held in Prater Park on 01 May), Vienna Festival and of course the Christmas markets.

Car Rental: There are many car rental companies located in Vienna and at Vienna Airport if you wish to hire a car during your stay.

Theme Parks: Located in Leopoldstadt, the second District of Vienna is the Wurstelprater Amusement Park. The Wurstelprater amusement park is home to the famous ferris wheel known as the Wiener Riesenrad, as well as many other attractions to keep you entertained.

Shopping: Shopping in Vienna is certainly an experience and if you enjoy shopping and looking in elegant boutiques and department stores, then you are in for a real treat in Vienna. Most of the major fashion outlets and shops can be found in the city centre around the pedestrianised streets such as the Kärntnerstrasse and Graben. However, there are many alternative shops that are located close to the Mariahilfer Strasse and Neubaugasse. If you prefer larger shopping centres, then you can visit either the Ringstrassen Galerien which is located near the Opera House or Lugner City which is near Westbahnhof.

Markets: Vienna has several markets such as the Naschmarkt, Karmelitermarkt and multicultural Brunnenmarkt Market, which are well worth a visit.

Christmas Markets: Vienna has many Christmas Markets (Christkindlmarkt) throughout the Festive season and most can be found in and around the city centre. The markets usually start mid to late November and then finish at the end of December or early January.

Hotels And Accommodation: Vienna has a wide selection of hotels to suit all requirements and budgets, ranging from small traditional guest houses to the larger luxury hotels.

Restaurants: Vienna certainly has its share of restaurants and these eateries range from low cost to high end high priced establishments. This means that there is something for all tastes and budgets with a wide range of cuisines.

Nightlife: Whether you are visiting Vienna for a quiet romantic weekend, a relaxing break or wish to party the night away, Vienna has something for everyone. The nightlife in Vienna is varied from low key establishment right through to hard hitting party clubs and venues.

New Year: Vienna is a great city to celebrate the New Year with festivities and entertainment starting in the afternoon and continuing through the night. Music, street parties, concerts, fireworks and a great atmosphere are what you will find in Vienna on New Year’s Eve.