A Simple Guide To The Airports For London

In this guide, we take a look at the major International airports for London.

How Many International Airports Are In London?

There are currently 6 International Airports that service the city of London Itself. Combined, these six airports now create the busiest airport network in the world, in terms of passenger traffic. As well as being the second busiest in terms of aircraft flights.

What Are The Six Airports In London:

Most people have heard of London Heathrow Airport and London Gatwick Airport, simply because they are the largest airports of the six. The question that most people ask when they hear that London has 4 more is:

What other airports are near London?

The six International airport in London are:

Why Does London Have 6 Airports:

The city of London now has more International airports, than any other city in the world but why so many?

In a nutshell, is it simply down to expansion, on lack of it!

Over the years, tourism into London has grown. With this growth in tourism, came the demand for more air travel into the city. However, there was no way that Heathrow could expand, so more smaller airports were introduced. These airports were all single runway airports, located further outside of London. They were all built on the sites of old RAF bases, with the exception of London City Airport.

With a large number of airlines now using each of the 6 airports of London, it then raises the question:

What Airport Do You Fly Into For London?

As previously mentioned, passengers flying into London have a choice of 6 airports to choose from. Which one you choose, will depend on several different factors. A few of these factor are: 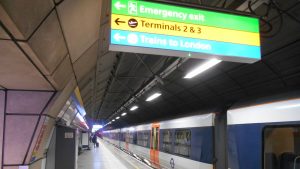 Although all the airports for London have good transport links to the city centre, some transfers do take longer than others. Also, the cost of transfers to London from the airports are more expensive.

Below, are the distances from each of the 6 airports to the city centre of London itself. It also lists the approximate journey time by road.

Please Note: The journey times will vary and are determined by both weather and traffic conditions.

Which Airport In London Is Closest To The City?

Both London City and Heathrow Airport, are connected to the city of London via the London Underground and DLR (Docklands Light Railway) networks.

So, which is the best airport for you to fly into for London?

Each of the 6 airports, all have their advantages and disadvantages but let’s take a look at each airport, to see which is the best for you.

Advantages and Disadvantage Of All 6 Airports For London

Without doubt, if you can get a flight into London City Airport, then you will be much closer to the city centre. As a result, your transfer time will be much less than flying into one of the other airports for London.

However, this is one of the problems with London City Airport! Although it is the closest airport and just 8.5 Miles (13.7 Kilometers) from London, there are less flights available. The flights to London City Airport (LCY), are more restricted than many other larger airports in London. Due to this fact, the airfares for flights are generally more expensive.

The rail link from Heathrow Airport to London is very quick and efficient. So, if you can get a flight to Heathrow for a lot less money than London City, it might be worth flying into Heathrow instead.

If you are lucky enough to find a cheap flight into London City, then that may well be your better option.

If you are not travelling on a budget and don’t mind paying more for your flight, then why wouldn’t you choose London City Airport?

So, the answer to the question “Is London City Airport Better Than Heathrow?”, is simply it depends on your circumstances.

London Heathrow Airport, is the largest and busiest airport in the UK. As a result of this, it has great transport networks to the city of London. Located just under 16 miles to the West of the centre of London, it is one of the first choices with many passengers flying to London.

Although it is the second closest airport to London, it is regarded as London’s number one airport.

Is Gatwick Or Heathrow Closer To London

Out of the two largest airports in London, Heathrow is closer to London than Gatwick. Heathrow is located approximately 15.7 Miles (25.3 Kilometers) from London, whereas Gatwick is 27.8 Miles (44.7 Kilometers).

Is It Easier To Get Into London From Heathrow Or Gatwick

As well as being located closer to London, Heathrow Airport also has a better and quicker rail link to the centre. This said, Gatwick Airport also has a very efficient train service from the airport to central London. At times, it can be just as quick to reach the centre of London from Gatwick!

It is often the case, that it simple comes down to which is the most convenient of all the airports in London, at the time of your travel.