A Guide To Buying Colosseum In Rome Tickets

This guide is designed to help provide you with a few tips on how to see the Colosseum in Rome without experiencing all the large crowds. 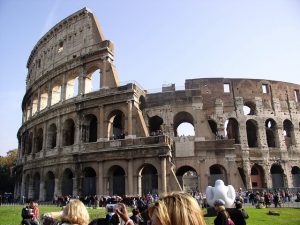 The Colosseum in Rome, is probably one of the most iconic and most visited attractions in the world. The Colosseum Rome, has approximately 10-11,000 visitors, which when calculated, equates to over 4 million visitors a year. As you can appreciate, this huge amount of people visiting one attraction, can create large crowds, especially in high season and school holidays.

Obviously, these figures do fluctuate throughout the year and during the high peak periods such as Summer, there are more tourists each day visiting Colosseum and this only results in one this, ‘Huge Queues’.

Now, the last thing you want to be doing in the blazing heat, is to be stood in a queue for hours, waiting to get into The Colosseum. If you do wish to visit The Colosseum when you are (Which is highly recommended you do), hopefully these simple tips will make your visit to The Colosseum in Rome easier and less stressful.

There are several ways in which you can visit The Colosseum Rome and sadly, the majority of people choose the wrong way, which then ends up with them standing in the queues with everyone else!

Do Not Make This Mistake:

A large number of people do not purchase their ticket until they arrive at The Colosseum on the day they want to look around it. This really is not a good choice and is not advisable because you will only have to join the queue and spend a long time queuing just to get your tickets. Yes, on some circumstances, you may not have any other option but to do this, but if you can avoid buying your ticket on the day, do so. Purchasing your tickets in advance is always advisable and will save you a lot of time on the day.

Tip: If you do purchase your tickets for The Colosseum on the day you visit, ensure you are fully prepared for the wait, especially if it is in the height of Summer. Make sure you have plenty of water to drink, protective clothing (e.g. Sun hat), Sun cream and food. You may be very lucky and not experience a large crowd but generally, the queues are big!

Security At The Colosseum In Rome

As you can imagine, The Colosseum is one of the most visited attractions in Rome and the Security is very strict. Before entrance to the Colosseum, you will be required to pass through a Security check. You are allowed to take small bags inside The Colosseum but the will be checked upon entry.

Pre-Book Your Tickets For The Colosseum In Rome

Guided Tours For The Colosseum In Rome:

Guided Tours are a great way to see The Colosseum and for many different reasons. Not only do you have a professional tour guide showing you around the Colosseum but they will also provide you with all the relevant information you need to know and can often get you access to many different areas of the Colosseum, which are restricted and not accessible to tourists.

Another added bonus when you take a guided tour, is that you will get generally receive ‘Skip The Line’ access to the Colosseum because you will be using one of the special entrances for groups and tours.

Skip The Line The Colosseum In Rome:

If you do not want to join a guide tour of the Colosseum in rome but would like to avoid the queues, another good alternative, is to purchase one of the ‘Skip The Line’ Colosseum tickets. These tickets will allow you to skip the line at the Colosseum and enter through one of the special entrances at the front of the queues, designed to reduce your waiting and eliminate queuing.

Prices for the Colosseum Rome tickets vary and are determined on when you visit, what you want to see and have access to, as well as which ticket you purchase such as ‘Skip The Line’, Behind The Scenes, Fast Track, Combination ticket, underground with arena floor access, group tour and more.

What Is The Colosseum Built From: Stone, Sand and Concrete

Seating: The more important the citizen, the better seat they were given, with the best seats reserved for senators.

Skybox: A Special ‘skybox’ was reserved for the emperor.

Hypogeum: Below the arena was the hypogeum, which is still visible today.  The Hypogeum, was a series of underground tunnels that were used to keep animals such as lions, rhinos and panthers, The animals could then be released into the main arena via trapdoors.

Once the home of gladiator battles, staged sea battles and re-enactments of ancient myths, the Colosseum in Rome is now one of the most popular tourist attractions in the world.

Although it is now partially ruined, the icon of ancient Rome, the Colosseum has stood for nearly 2000 years.

Construction began on the Colosseum in 72 AD under the direction of the Emperor Vespasian. Although it only took eight years to build, Vespasian sadly died before the Colosseum was finished and was opened by his son, the Emperor Titus.

Although it is partially ruined, it has endured for nearly two thousand years.

The Colosseum, was originally called the Flavian Amphitheatre and was built by thousands of slaves.

It was made of stone, bricks, and concrete.

Once the Colosseum in Rome had been completed, the epic structure could seat 50,000 people.

The first games that were actually held in the Colosseum when it was first opened, lasted for a staggering 100 days! Admission was free to the games, which helped keep the emperor popular with the people of Rome.

The games consisted of many events which included animal fights, hunts, executions of criminals, Gladiator battles and re-enactments.

The most famous events in the Colosseum, were most certainly the Gladiators. The Gladiators were professional fighters, who battled each other in a combat to the death, simply for the entertainment of the people. However, successful Gladiators became celebrities, who would pull in huge crowds of spectators and would earn great riches, that would allow them to retire in comfort – if they lived that long, that is!

Another great spectacle and sometimes greater than the Gladiator battles, was the re-enactment of sea battles, which were known as Naumachia. The main arena floor of the Colosseum would be flooded, to allow real ships to sale on it for the re-enactments and battles. This could be done because the Colosseum itself, had been built on an artificial lake, and underneath it, ran a number of channels which could divert water from a nearby aqueduct and flood the arena floor.

After these epic re-enactments had taken place, the arena floor could then be drained quickly, so that another event could be held on a dry surface. However, it wasn’t long until the floor of the Colosseum was re-structured and a new more complicated facility know as the Hypogeum was built.

Basically, the Hypogeum was an underground maze of tunnels and cages, which had elevators allowing animals and gladiators to quickly enter the main arena through a series of trapdoors in the floor.

Fire Damage and Earthquakes To The Colosseum

Fights, hunts and other events were held and staged in the Colosseum for hundreds of years. However, sadly over time the amphitheatre was damaged by both fire and earthquakes and by the 6th century, using the arena for events was over.

In 1349 a major earthquake hit Rome and damaged part of the outer wall and the fallen stone from the Colosseum was then taken away to use in other buildings.

Unfortunately, for many centuries after, the Colosseum crumbled into ruin. Restoration of the Colosseum however, did begin in the 1800s and still continues to this day. As a result of this restoration, The Colosseum in Rome is now the major tourist attraction it is, as well as a World Heritage Site.

The Colosseum is open pretty much everyday throughout the year from 9am in the morning. However, there are several days that it is not open and they are:

Please Note: The closing times for the Colosseum do change throughout the year and it is advisable to check the closing times before you visit. The times below are subject to change but were correct at the time of writing:

Is The Colosseum Open On Christmas Eve

Yes, the Colosseum is usually open on Christmas Eve

Is The Colosseum Open On New Years Eve

Yes, the Colosseum is usually open on New Years Eve

We hope this short guide has helped provide some useful information about the Colosseum and also helped you choose the right Colosseum in Rome tickets for your visit.

More useful Tips about Rome – Hotels Close To The Colosseum