Are You Flying From Or Into Manchester Airport?

If so, you are probably wanting to find out the answers to various questions such as, transfers to and from airport, train information, parking, check-in and Arrivals procedures, which are the nearest hotels to the airport at Manchester and are there any hotels located onsite, plus much more. 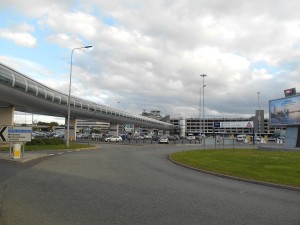 This page is designed to provide a basic overview of Manchester International Airport in the UK and to answer some of the frequently asked questions by passengers travelling to and from the airport.

Where Is Manchester Airport

Manchester Airport is located on the outskirts of Manchester which is in Lancashire in the North West of England.

How Far From The Airport Is Manchester Centre

Manchester city centre is approximately 9.2 miles from the International Airport.

What Is The Manchester Airport Code

The IATA code is: MAN and the ICAO code is: EGCC

How Long Does It Take To Get To Manchester City Centre

The journey time from Manchester Airport to the centre of Manchester by road normally takes about 20-25 minutes but this all depends on the traffic. If you are taking public transport such as one of the local buses from the airport, then the journey will be longer due to routes the bus takes and stops they make along the way.

Direction And Getting To Manchester Airport

Is There A Train Station At Manchester Airport

Yes, there is a direct rail link to the airport at Manchester.

Is The Train Station Open 24 Hours

Yes, the train station at the airport is open 24 hours 7 days a week.

Where Is The Train Station In Manchester Airport

The Manchester Airport train station, is located at the front of the main airport terminal. The station can be accessed from the airport via a walkway, which means you do not have to go outside to get to the station.

How Long Does It take By Train To Piccadilly Station

If you catch the train from the airport station to Piccadilly station, the journey is usually about 15 minutes

Is There A Ticket On Departure Machine

Yes, there are Ticket on Departure Machines at the train station and they are available 24 hours.

There are now flights to over 225 destinations worldwide from Manchester International Airport.

The airport offers both short and long term parking both onsite and offsite as well as ‘Meet & Greet’ parking.

Pick Up And Drop Procedures

All terminals at Manchester Airport have designated ‘Drop Off’ areas and you can drop off passengers for free as long as you do not leave your vehicle un attended and ensure you are only parked for a minimal time to drop off passengers. If you need to go into the airport terminal, you will be required to park your car in one of the ‘Short Stay’ car parks and pay the appropriate parking fee.

If you are picking passengers up from Manchester Airport, you will be required to park your car in one of the short stay car parks.You will be issued with a token upon entry and you must then insert the token into one of the pay machines before returning to your vehicle and pay the appropriate parking charge. You will then be re-issued with the token which you will need to insert into the barrier upon exiting the car park.

How Many Terminals Are There

There are three terminals at Manchester and they are simply named Airport Terminals 1,2, & 3

Which Airlines Fly From Which Terminals

Below is a list of airlines and which terminals at the airport they fly from:

(Please Note, this was correct at the time of writing but it is subject to change and it is advised to check before you arrive at the airport.)

Is There An Airport Lounge

Yes, Manchester International Airport has several lounges that are located ‘Airside’ in the departure lounges in each terminal. The Escape lounges are located in all three Terminals at Manchester Airport and passengers can enjoy a variety of facilities including

Any passenger is allowed to use the Escape Lounges (for an additional fee) regardless of which airline they are flying with and what type of class they are flying in. If you would like to use the Escape Lounges at Manchester Airport, you can either pay on the day when you arrive at the airport or pre-book your entrance Online before you arrive. Pre-booking your entrance Online is cheaper than if you pay at the airport.