What Is The First Transpennine Express

Which Cities Does It Service

Taking Your Bike On The Train

What Is The First Transpennine Express

Which Cities Does The Transpennine Express Service

The Transpennine Express service connects many great Northern cities and the following cities are just a few:

There are approximately 300 services in operation every single day which serve over 100 stations. These services connect passengers across the Pennines and further afield to Scotland.

The benefits of travelling First Class include complimentary tea, coffee, water and Biscuits.

Please Note: This only applies on services that has catering provided.

Taking Your Bike On The Train

If you wish to take your bike on the train, you should call and ensure that there is space available for the time of your travel. Each train has 2 designated spaces for bikes and if you do not pre-book your space for your bike in advance, you can turn up on the day but it is purely on a first come first served basis.

If you wish to pre-book your bike space for your train journey, you can do so by calling the reservation team on the following telephone number: 0345 600 1674

Transpennine Express offer students the opportunity to save even more on their rail travel when holding a valid student railcard. Students can save up to 50% on

The student railcard is a great way to save money on your rail travel. And this can be used for journeys on the Transpennine Express. If you are aged 16-25 or over and in full time education, you are eligible for the Student Railcard.

Railcards are a great way for passengers to save money on their rail travel. There are several railcards available for several different groups of people. All of the railcards offer big savings on your train travel as well as additional saving on tickets for events, attractions, restaurants and days out.

As we mentioned previously, the Transpennine Express train service links a large number of cities and towns throughout the North of England. This means that there are a large number of routes across the Pennines and also in to Scotland. Some of the most popular routes include:

Manchester to Edinburgh and Glasgow 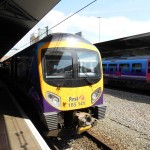 The Transpennine Express operates a train service that connects passengers direct with Manchester Airport from a large number of towns and cities in the North of England. The airport service is a great way to travel to and from the airport without the hassle of driving and parking. The service runs at regular times throughout the day and night during both week days and weekend. This service is perfect if you wish to travel to the airport and then stay at one of the Manchester Airport Hotels close by.

Below is a list of train station that the Transpennine Express train serve.

Many of the stations above are part of the famous Transpennine Ale Trail.

The Transpennine Express train network covers over 20 football grounds throughout the North of England and these include Premiership and Championship teams such as Manchester United, Liverpool, Newcastle, Leeds United, Huddersfield, Sheffield Wednesday and Sheffield United. Other lower division clubs such as Halifax and York are also on the network. If you follow football, these train routes and services could be the perfect option for your travel to and from the games.

Some of the UK’s top Northern holiday destinations are covered on the Transpennine Rail network. Great destinations such as the Lake District, Scarborough and Blackpool can all be easily accessed by train. If you are thinking of visiting any of these destinations for a holiday or short break, it is worthwhile taking a quick look to see if there are any special offers or deals available for the dates you wish to travel.

It is now possible to connect to FREE unlimited WiFi at a select number of train station on the Transpennine Routes. If you wish to use the FREE WiFi at any of the station, you need to look for the ‘O2WiFi’ signs.

There are several different types of tickets available for travelling on the Transpennine Express trains and routes and obviously the prices are determined by many different factors. The routes, times and dates of travel, age of person(s) travelling will all have a an influence on the price you pay for your train ticket(s). Travelling at ‘Off Peak’ time will also be cheaper than travelling at ‘Peak’ time and these are all factors that you yourself should take into consideration when planning your journey.

Children: Up to 2 Children under the age of 5 can travel FREE of charge when accompanied with a passenger holding a valid ticket.

As with most travel services, the sooner you book, the better deals you get and if you pre-book your Transpennine Express train tickets in advance online, you will receive the best deals and can save over 50% on your train tickets.